A bit of background before we get started: as Lindsey shared last week, here in British Columbia our Summer Reading Club theme is Funny Business. With this theme in mind Lindsey and another colleague participated in a webinar put on by the fabulous Lisa Shaia of Thrive Thursday and Thrive After Three called “12 Months of Children’s Programming: Grades K through 6.” One of the programs which Lisa and Joanne talked about was Battle of the Books which is a bracket style competition where books battle for kids’ votes  in multiple rounds resulting in one final winner. Rebecca Zarazan Dunn has been running a similar style tournament complete with tall ball players for a couple years now with much success. As a result of all this, Lindsey and our colleague Alicia thought it was high time for Vancouver to try our own Battle of the Funny Books! 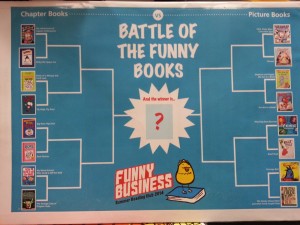 Now, cut back to my program: I basically wanted to get kids excited about the Battle of the Funny Books, read some of the titles together and have a goofy time. Here’s how it all shook down: I put out nametags and welcomed kids as they came in and encouraged everyone to sit on the floor. We sang the Bread and Butter chant as a hello and threw in lots of silly adaptions like “say hello like a tyrannosauras rex can” or “say hello like a chicken can.” Giggles a’plenty!

Next up I explained the Battle of the Funny Books competition and answered lots of questions about voting. I also let them know that my Super-Awesome-Branch-Head came up with a Battle of the Funny Books anthem which sounds a lot like the chicken song. They were on board! We jumped up and sang it with increasing speed until we were out of breath and sounded like frantic hamsters. An idea which struck me way too late, but I’d love for someone to try: set a timer or have one of the kids do it and let them know that as soon as it goes off you all MUST get up and sing. Might wreck the flow of a book, but what fun!

To catch our breath after all this silly singing we read Brief Thief by Michael Escoffier, which is my personal favourite of the 16 titles. I then showed the group some of the awesome funny books kids created in a program last weekend and gave them templates to take home in case they were inspired to write their own after sampling some funny, funny books. 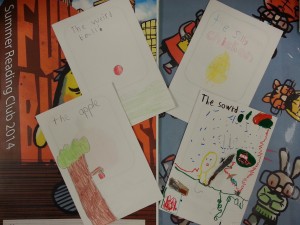 Before transitioning into a game I read Robert Munsch’s Put Me In a Book and then asked the kids would you rather be the writer or would you rather be Hailey? Perfect segue into a wicked game of Would You Rather! I came across this amazing book You Gotta Be Kidding which was chock-o-block full of great questions. I got the kids to stand up and read each choice while pointing to separate sides of the room. They voted with their feet and we laughed and discussed the merits of being wrapped in an octopus’ arms over being sat on by a baby elephant. Pure gold.

We finished by reading Click, Clack, Moo by Doreen Cronin and talked a bit about what makes a books funny. We squeezed in a couple more rounds of Would You Rather before singing Bread and Butter again and saying goodbye in some totally ridiculous ways. It was like a storytime but the kids were older and we laughed harder. I could get into this school age stuff!

11 thoughts on “Battle of the Funny Books: Summer Reading Club”