Hey remember when I put a call out for guest posts? Well I am delighted that some of you have taken me up on my offer! I’m here today to feature another wonderful guest post by Anne Pott.  Anne is a Library Assistant II in the Youth Services Department at Herrick District Library in Holland, Michigan.  She’s written about her Readers’ Choice Award Program. If you’re interested in knowing more about this program or would like her to share files, feel free to email her at apott@herrickdl.org.  She’s also sporadically found on twitter at @LadybugsLilAnne.  Take it away Anne!

As professionals in the library world, I think most of us enjoy speculating over, discussing, and celebrating literary awards. The reality for most people, however, is that we don’t have any say in which books receive these awards. In fall of 2016, I decided to try a new program giving our young patrons the chance to make their voices heard. Thus, the Herrick District Library Readers’ Choice Award was born. I have to give credit where credit is due, however. This whole program was inspired by Orion Township Public Library’s Dragon Award. I loved the idea of giving kids a little extra ownership of the library. I also think it highlights the importance of participating in the democratic process and what a privilege it is to have the right to vote.

I’d originally intended to pilot the program with kids in 3rd-5th grades with the hope of expanding once we’d worked any bugs out. However, as things sometimes do, the idea caught fire and spiraled until suddenly, we were planning for participation for everyone from kids in Kindergarten all the way through adults!

Last year, we took nominations from patrons for “candidates”. Kind of like primary elections. In retrospect, we felt that this wound up dragging the program out too long and that it lost momentum. This year, we’re planning to announce candidates based off of last year’s circulation stats.

We had paper ballots in the various departments in the library as well as online voting through our website. In the kid’s department, we have an area that usually has some sort of passive program going on, so we set up voting booths for the kids. It was pretty adorable. One of the things I loved the most, though, was the number of conversations I overheard with caregivers explaining to kids that “this is kind of what it looks when I go and vote for the president”, etc. It was great to see that engagement! We also let kids take “I Voted” stickers. Because stickers. Amiright? 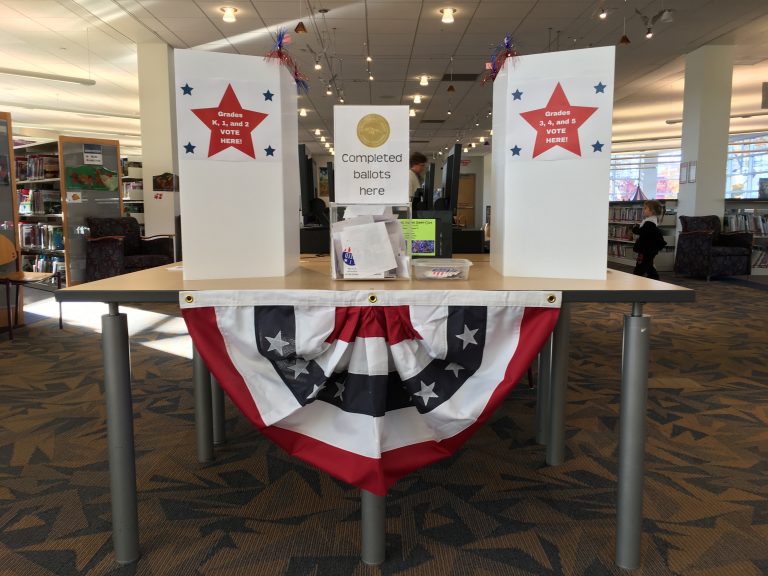 We had our candidates, our ballots, and our voting booths. We hung up posters at the library, and emailed local schools hoping they would encourage their students to make their voices heard. Then we crossed our fingers. I was absolutely blown away…we wound up with nearly 1,100 votes! Were some of them duplicates? Probably. However, we decided that our main goal was community engagement. We weren’t going to try to monitor for voter fraud. It really was just for fun.

The recipients of the first-ever HDL Readers’ Choice Award were as follows:

Grades K-2: Magic Tree House: Tonight on the Titanic by Mary Pope Osborne
Grades 3-5: Diary of a Wimpy Kid: The Long Haul by Jeff Kinney
Grades 6-8: Wonder by R.J. Palacio
Grades 9-12: The Hitchhiker’s Guide to the Galaxy by Douglas Adams 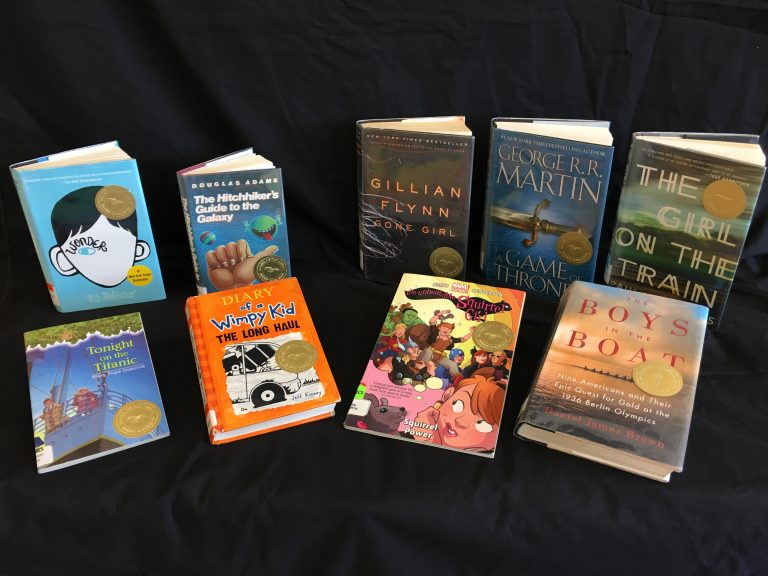 After we announced the winners on our website and social media platforms, we made seals using a custom embosser with our library’s logo and award title on it. We stickered the books, purchased additional copies where needed, and released them into the wild where they’ve been happily circulating since! Our Collection and Digital Resources team was even good enough to alter the records in our catalog so the winners will be searchable.

We also decided to donate copies of the winning books to each of our local schools. Thanks in large part to Scholastic’s pricing, we found it was within our budget to do this. To help save on cost, we didn’t donate all 4 to all of the schools, but just the books that were most applicable to the ages of the students each school serves. They were VERY excited to receive them! We put the award seals on them, of course, and our Community Relations Department made up “Donated by Herrick District Library” labels for us to put inside each of the books. And we know they’re getting love because one of our staff members recently let us know that her son had checked out a book from school with a Readers’ Choice Award seal on it!

As you can tell, this really became a library-wide affair. Nearly every department helped out in some way to make this happen. We’re certainly making some tweaks, but over all felt that it was a successful enough program to plan to continue with it indefinitely. I’m particularly interested in continuing a voting program because I feel that especially now, it’s more important than ever to engage kids in understanding the democratic process.

Does your library provide voting programs for your young patrons? Do you have patrons’ choice awards of some sort? If so, I’d love to hear about them!