We had our third Library Services for Children Journal meeting this past Sunday.  We read two articles that explored play and the learning environment.  Here’s a quick recap of the articles and discussion points.  This post, except for the final thoughts at the end, was written by our group leader Jennifer Streckmann. Want to get involved with the LSC Journal Club? See if you have a local group or start one of your own!

Article #1: Play and the Learning Environment

Article #2: Influence of Number of Toys on Toddler Play

The group participated in a ‘blue-sky’ activity where we paired off and re-designed a library space. Each pair was given a copy of the image below that depicted a children’s department. Then they were given a blank layout to design the space from scratch. After working in pairs we all shared our designs. 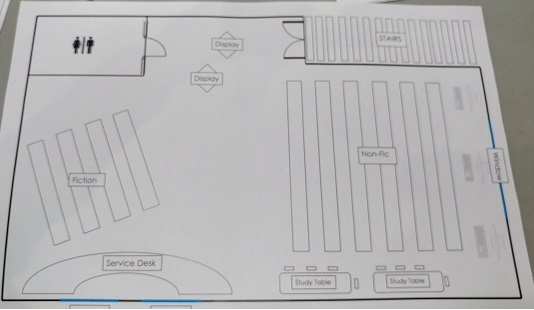 One of the reasons I love the LSC Journal Club meetings is that I start to think about things in a new way. After listening to many of the challenges libraries face (budget, staff, space) on their quest to design a play-friendly space, I had an “aha!” moment where I narrowed down three important factors to consider with regards to design in general. They are:

We also talked about how important it is to observe your space. Some of the organizations in Vancouver like Science World do a great job of testing out their spaces and regularly observing them before making tweaks and changes. This of course requires time and energy but the resulting changes can be powerful.

That’s a wrap, folks!  Did you read the articles this month? I’d love to hear your thoughts in the comments!